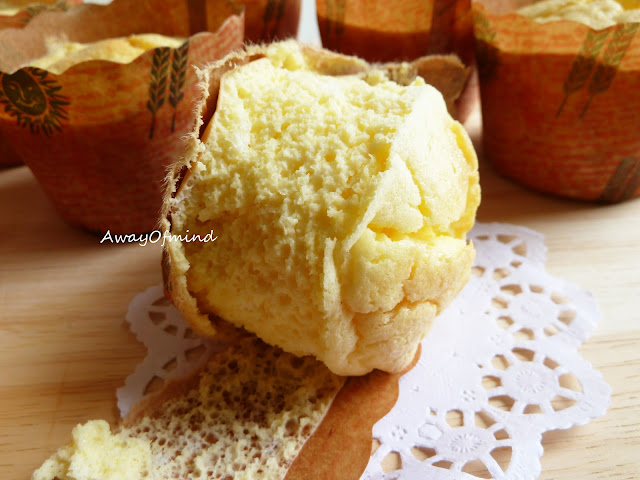 Another rainny day, a perfect dessert for Gabriel is this Souffle Cheese Cupcake. He dashed to the dinning table when he heard "cheese cupcake", he spooned the cake spoonful by spoonful into his mouth while saying "Mama, this is so nice!" I'm glad to see him content and satisfy with this cupcake.

By folding in the egg whites into the cheese mixture makes the texture of the cake soft and light. The flavour of cream cheese is still there, the cake tastes like eating souffle, soft and tender. If you love the cake to be light, this is the right recipe.

The top of this cake cracked like earthquake due to my impatient in waiting the cake to raise and brown, switched the oven heat to higher temperature was a mistake! This cake is recommended to take it on the very day, as the softness and tender will disappear if you keep it in the fridge.

You may hop over to Corner Cafe and Baking on Cloud 9 to see theirs beautiful baked. They have the top of Souffle Cheese Cupcakes beautifully brown too.


Steps:
1. Preheat oven to 150°C. Line 12 muffin holes with paper cups. Place a large tray of hot water inside the oven just below the shelf where the cheesecakes are to be baked.
2. Soften cream cheese with milk and oil in a bowl placed over a double-boiler. Whisk until smooth, remove from heat and let cool until lukewarm.
3. Beat egg yolks with 40g sugar until combined, beat in lemon juice. Gradually whisk in cheese mixture to combine. Lightly whisk in sifted cornflour, mix well.
4. Beat egg whites until foamy. Then gradually beat in 70g sugar, spoonful by spoonful, until firm but just under stiff peaks stage.
5. Fold 1/3 of the egg white mixture into the cheese mixture until thoroughly mixed in. Repeat two more times with the remaining egg white mixture.
6. Spoon batter into the prepared muffin cups, filling each cup nearly to the rim.
7. Bake for 35-40 minutes, or until the tops of the cheesecakes are lightly browned.