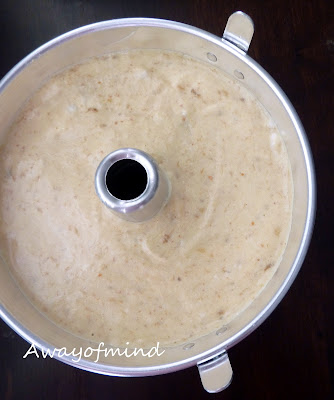 When I was reading the recipe, my gust told me ...hey, are you able to handle the lumpy banana? will heavy banana sink and egg white float? well, the phophesy becomes reality! I'm using Carol's Banana wholemeal chiffon recipe 香蕉全麥戚風蛋糕 The failure of this baked has nothing to do with her recipe, so the fingers pointed at ...me! 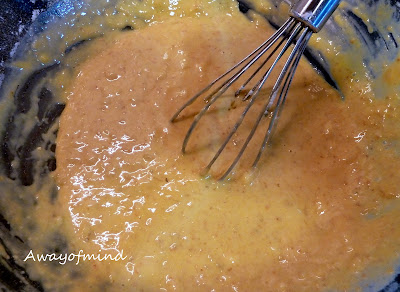 It began with adding too much banana in the mixture...I was too lazy to measure the banana, took two big bananas as 160g (after I baked the cake, I read through Carol's recipe and found she shown one banana in her recipe!) Then, the mixture was far too sticky to stir, I added extra olive oil and milk! Is this the no.2 mistake? 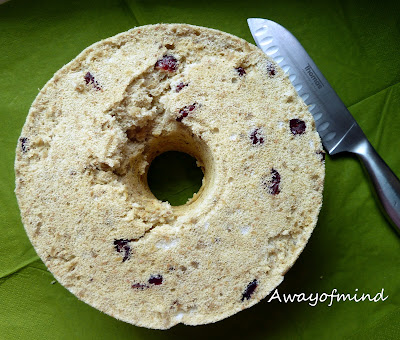 First heart attacked...when dislodging the chiffon, rip portion of the final bit off the bottom..., oh no! Heart breaking! 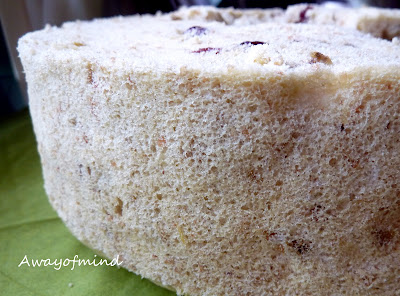 Thing which make me happy about this baked...yes, clean wall! It came out clean! 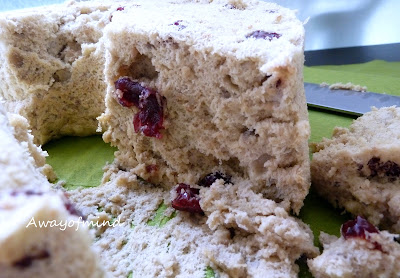 Second attacked...nightmare!! The texture is very soft, not sure whether this is due to too much banana or too much oil? or may be too much ... 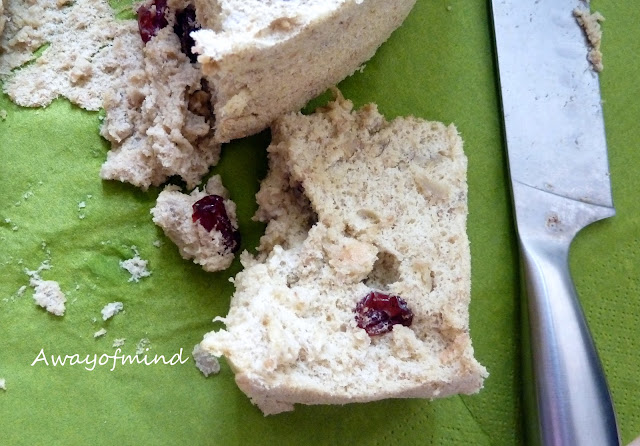 Any ideas how I can do better for next chiffon?
by Awayofmind Bakery House 16 comments:
Email ThisBlogThis!Share to TwitterShare to FacebookShare to Pinterest
Labels: Chiffon Cakes 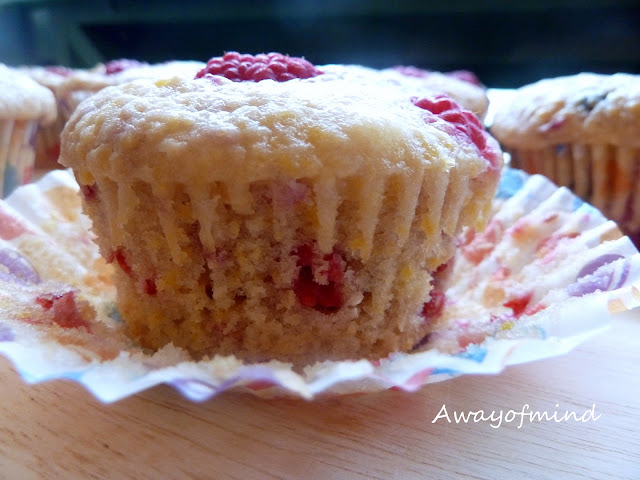 This morning me and Gabriel went to West Coast Park again, I told him that we were meeting Jay and Aunt Ann, he seems very happy about the meet-up. He kept asking me where is Aunt Ann new home :) After an active morning, he slept well this afternoon and I had plenty of time to bake this special muffins for him as dinner. I did some research and used Raspberry Cheesecake Muffins recipe from Muffin Recipes website with some modifications...hahaha, I like to add what I like as always. This is also the main reason for most of my failure baked too. Lucky me, this time it turned out well!
Read more »
by Awayofmind Bakery House 15 comments:
Email ThisBlogThis!Share to TwitterShare to FacebookShare to Pinterest
Labels: Cupcakes / Muffins 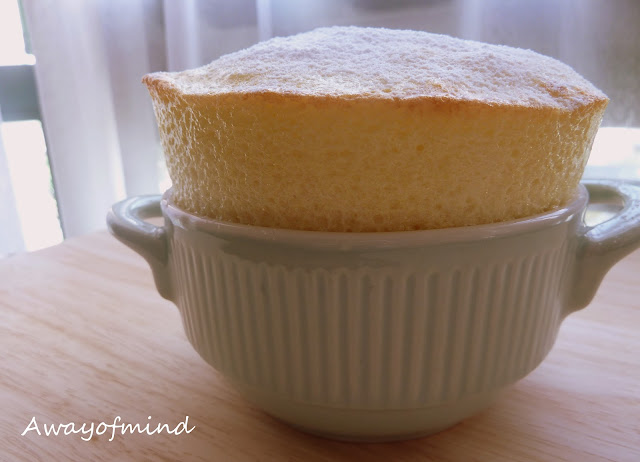 I'm that kind of people who work better under pressure...hahaha. Today is a happy day because of this beautiful souffle in front of me. This is my second attempts on souffle. After took it out from oven, the lift last for 5-8 mins.  I had enough time to take the shots, accompanied my son who woke up suddenly from his nap for a while then came back to see the souffle fell flat :) 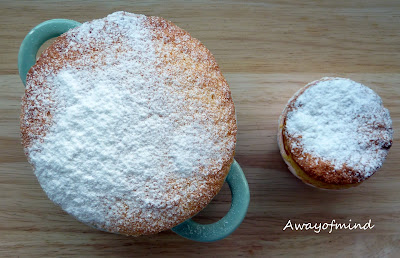 First time I saw souffle was on Nasi Lemak Lover's blog, Sonia tried Ellie's (Almost Bourdain) Lemon, lime and orange souffle with some modification, she baked Orange and lemongrass souffle, I was very impressed with her baking and wow her souffle in front of my screen! Few days ago, Almost Bourdain posted Shout-out (12) and I got changes to read Ellie's recipe, she stated lot of useful tips to bake a successful souffle and I found one important word...she mentioned "foolproof" recipe and I said to myself, hey, may be I can try baking souffle too :) Don't laugh at me when you see that I'm not using the traditional ramekins to bake these souffle. I'm too eager to try the souffle recipe without having time to get the proper porcelain containers! 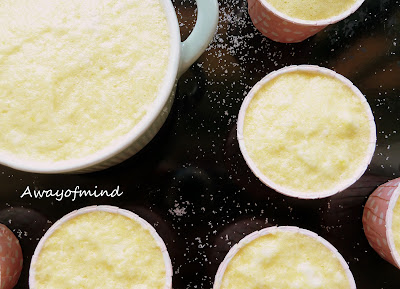 Before baking...
After this baking, I understand why the traditional way to make souffle is using the porcelain containers (ramekins) instead of using the normal paper cups. The normal paper cup purely can't do the job! It doesn't hold the souffle once out from the oven, the souffle lifted very high in the oven but fell rather quickly, not even single side photo taken for the souffle in paper cups. The paper cup souffle beside my green porcelain also fell flat after the top view shooting :(
Read more »
by Awayofmind Bakery House 18 comments:
Email ThisBlogThis!Share to TwitterShare to FacebookShare to Pinterest
Labels: Desserts / Sweet Treats / Ice-Pop / Jelly / Puddings 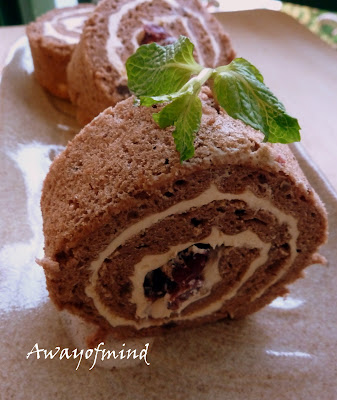 Waiting for quite some time before I recieved Carol's baking books. My first try on her recipe is... roulade. I must say that I like Carol's baking books. I love the step-by-step photos and tips which she took effort to compile. I'm using Carol's Banana Chocolate Roulade recipe and steps to make Cranberry Chocolate Roulade, and replaced the banana with dried cranberries. Attached is the ingredients used but not the steps, the original recipe is in Mandarin which I don't think that I can translate it accurately.
Read more »
by Awayofmind Bakery House 18 comments:
Email ThisBlogThis!Share to TwitterShare to FacebookShare to Pinterest
Labels: Swiss Rolls 蛋糕卷 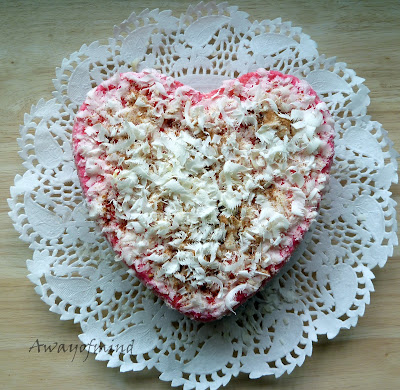 This is my second time trying to bake with ricotta. There was a "disaster" when I baked Ricotta Cream Cheese Cheesecake for the first time, due to my impatient the cheesecake was not long enough in the fridge, it collapsed when I dislodged it from the tray.  Luckily it doesn't happen on my Valentine's Cheesecake!
It should be a raspberry cheesecake in the begining. The idea came from Coffee Beans when one morning I got chance to eat their raspberry cheesecake, it was lovely and beautiful. I love the raspberry pink! Unfortunately, I couldn't get hold of raspberries on the day of baking so I turned the cheesecake into pink using the cherry red food colouring. Bottom layer of the cheesecake is with cherry red food colouring and top layer is by mixing a bit of cheery red into the original cheesecake mixture. I used the recipe from Joy of Baking as I really love the light, fluffy and creamy taste of the cheesecake.
Read more »
by Awayofmind Bakery House 11 comments:
Email ThisBlogThis!Share to TwitterShare to FacebookShare to Pinterest
Labels: Cakes 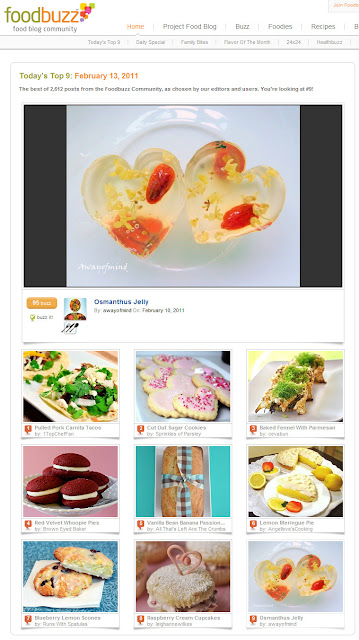 We received double surprises for this Valentine's Day. First one came from Foodbuzz, I feel honour for being selected to the Top 9 in Foodbuzz on 13 Feb, 2011. I want to thanks the Foodbuzz community editors and users for chosing my Osmanthus Jelly. Thank you!

Second one came from WT... his one is confidential ^_^ 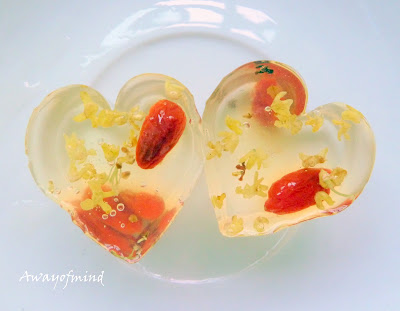 A few months ago, I saw the beautiful creation of Osmanthus Jelly at AnnCoo Journal and Noob Cook Recipes, wanted to make one but couldn't get hold of the dried Osmanthus, 裕华百货 is not near to my place. All the Chinese Medical Halls nearby are not selling dried Osmanthus, until one day I got it from a CMH at Jurong West. 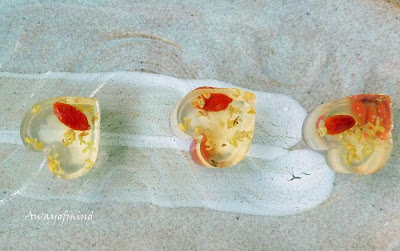