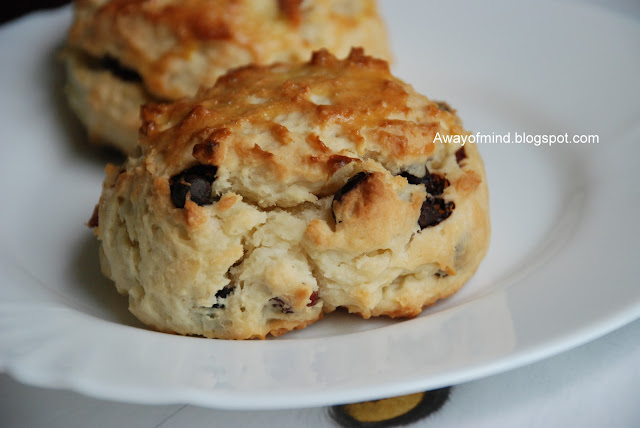 The theme for this Bake Along #27 hosted by Lena, Joyce and Zoe is scones!  I have not try baking any scones as I always think it is a difficult task to bake a batch of light and golden scones as it is a test of a good baker. However, I couldn't resist myself in baking one after seeing Jeannie from Baking Diary baking her beautiful Chocolate Chips and Dates Scones....huh, I have most of the ingredients but not buttermilk, so I twist a bit of the recipe using yogurt and self raising flour. Is my lucky day, it comes out with a nice outer crust and light tender crumb ...and is delicious!﻿ 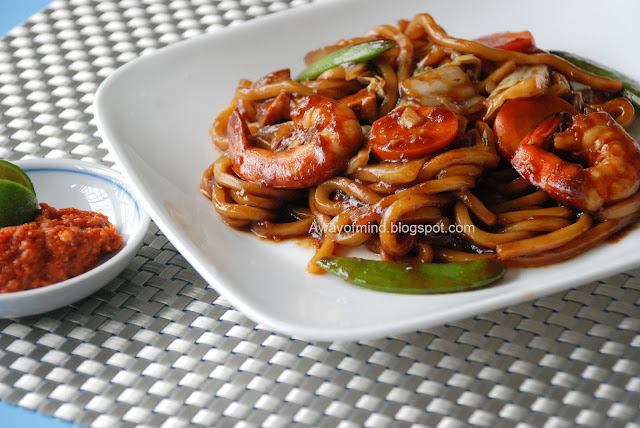 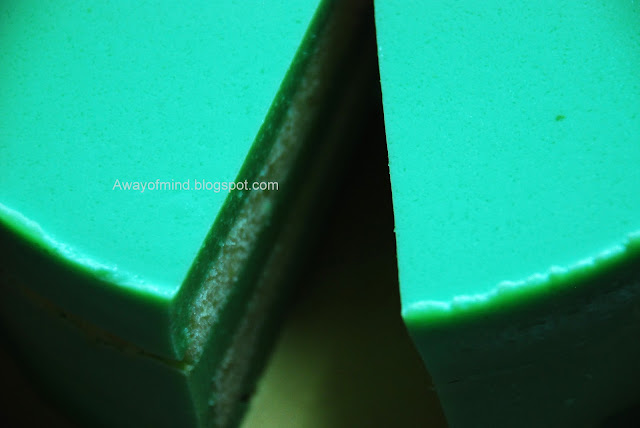 It is the third week of June and I am still here waiting, waiting for seem unable come by TOP. Everything is unable to decide. That kind of feeling is horrible, I am trap and unable to move forward! Last night, Madasgascar 3 was the first cinema movie for Gabriel.  WT and me had our last movie at the cinema 5 years ago.

Saw Joceline made the Pandan Layer Cake, I plan to clear my unfinished coconut milk and srewpine leaves in the fridge. This Friday LG will be at my place and pandan layer cake will be a good supper for all. Using the same recipe from my previous baked but tried to bake a taller chiffon cake (thinking of there will be many to feed) using 5 eggs instead of 4 eggs... that was a bad decision. It ended up I have an extra layer of chiffon sponge unable to fit in the mould and the sponge is too big for the pandan jelly to cover the side thoroughly. I used another mould to make a one layer pandan cake for...Gabriel and WT. Hmm... is time to get a 9" round mould :)

If the cake say "I am ulgy but delicious!" do you believe it? Anyway, Gabriel didn't look at the appearance, when I shown him the one layer cake, he ate it and said "delicious!" I asked for a bite to taste the cake, he answered with a big "NO!" ...haha, no sharing. 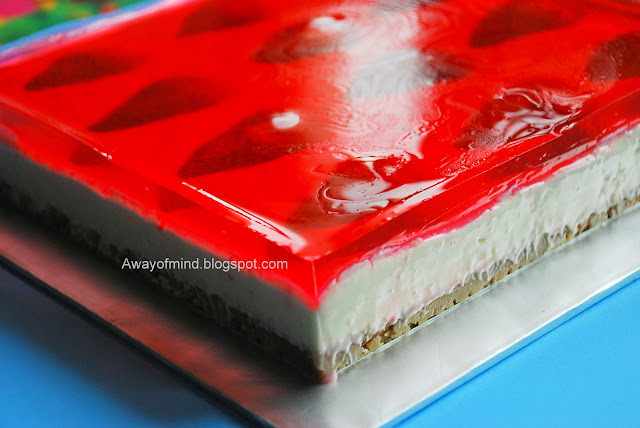 Made the Jelly Hearts using the recipe published on The Sunday Times. My baking mould is bigger, I used 2x the ingredients, but the cream cheese layer seems too soft, in future I should add more gelatin powder to it. 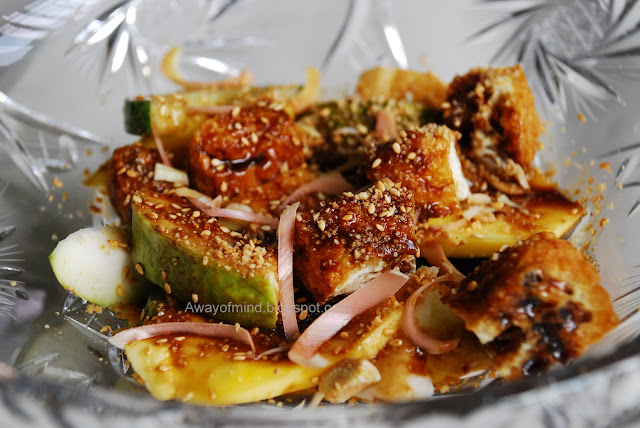 Penang Gurney Drive is famous with its street hawker food. Many years ago, Gurney Drive Hawker Food stalls was parked just next to the beach, because of the bad human habits, lot of waste were thrown to the sea and causing sea pollution. Then, the government moved the food stalls further away from the beach and hopefully this action help in deter people from throwing rubbish directly to the sea. Today, Gurney Drive is no longer the same as the one I knew, however the hawker food stalls still there. There are wide variety of Penang hawker food available. One of my favourite street food is Rojak or fruits salad with thick shrimp paste on it :)
Read more »
by Awayofmind Bakery House 3 comments:
Email ThisBlogThis!Share to TwitterShare to FacebookShare to Pinterest
Labels: Salads 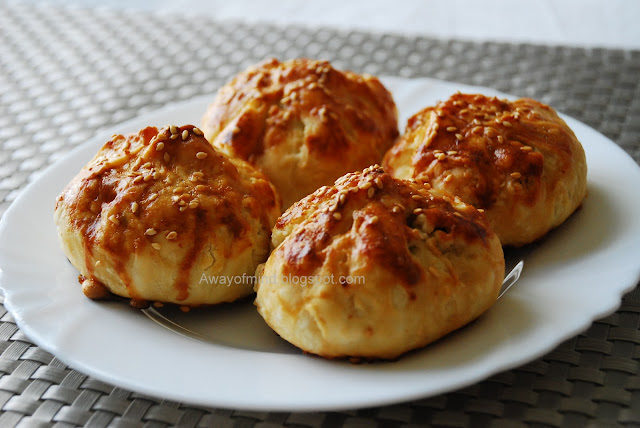 I baked these siew bao/ crispy BBQ pork bun few weeks ago. 12 of them, for the first time no leakage of gravy from the seal. Then few days later I baked another batch of 18 (using 1.5x the ingredients) for Friday LG supper. All using the same recipe from my previous baked. This siew bao is my fifth attempt so far, if not mistaken. However, there is something more which I want to tell you, a personal observation on these pastry, not to offend anyone.

When I was preparing my oil dough for the 12 siew bao, the dough felt very dry (compared to my previous four baked). I was worried, thinking that it might be a failure attempt. The rolling of dough was a nightmare, as the water dough couldn't contain the oil dough, the oil dough was far too dry, the dough torn while rolling up. However, it surprised me when come to wrapping the filling, the dough was able to seal very well, this has not happen before in my previous four baked.


Then, in the oven, the siew bao didn't leak out any gravy!! I was so happy, how come this happen? Does it means that the oil dough has to be dry so to get a good seal? Then the true came out when I bite on the pastry, hey... it doesn't has the flaky layers. This is because the dough torn, the oil dough and water dough had mixed into each other layers.

To confirm about my finding, I tried to make another batch of siew bao a few days later. I mixed the oil dough well and it formed a rough dough like my previous four baked. The rolling was easy, the dough was soft until the end of sealing up of filling. However, what happened was like in my previous four baked, the pastry puff up and create gaps at the seal, this cause some of the gravy from the filling...leaking out! The texture of the pastry is with perfect flaky layers.

So which one you like? As for me, I still prefer the flaky layers pastry. 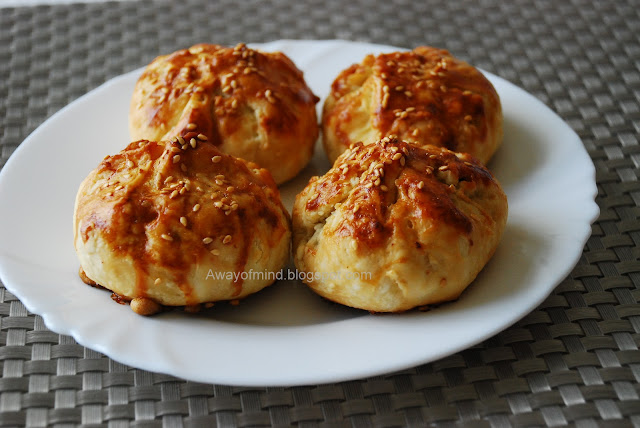 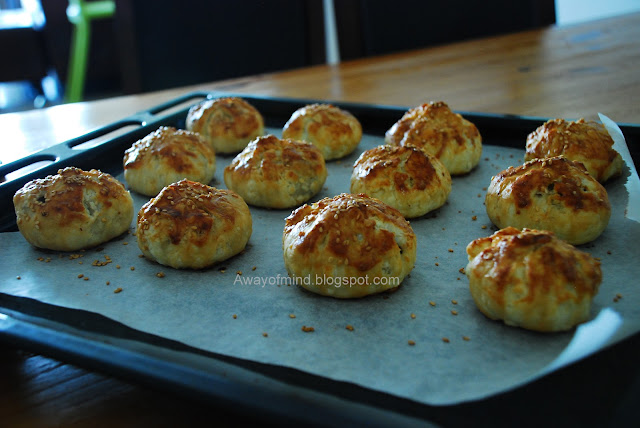 12 pcs batch with no leakage of gravy 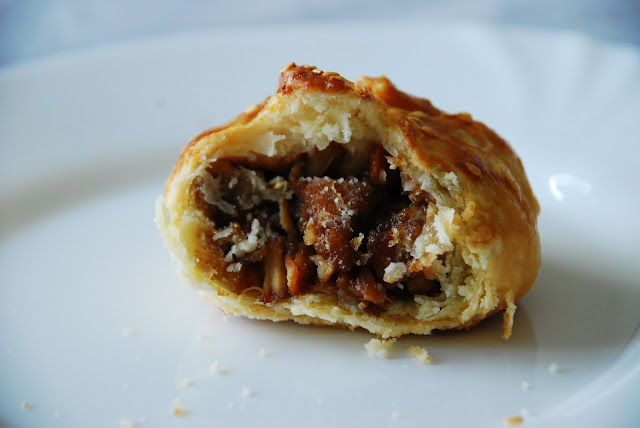 This is one of the 12 pcs I baked. See the pastry? There isn't clear layering in the pastry, the pastry is a bit hard compared to my previous four baked. 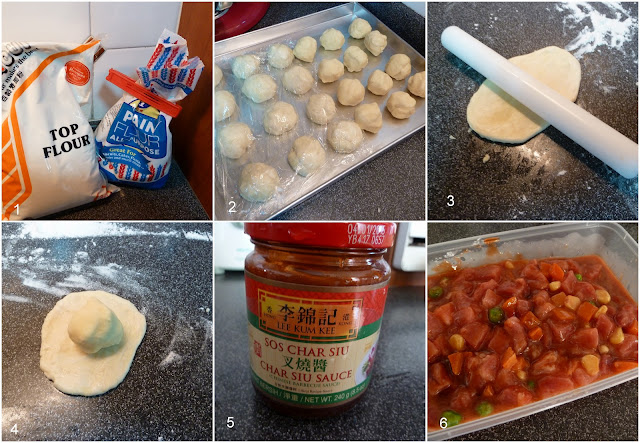 Steps:
1. Marinade all the ingredients (except garlic and cooking oil) for an hour.
2. Heat wok, add cooking oil. Stir-fry garlic for 2 mins, add the marinade pork. Stir-fry the mixture until cook, or about 8 mins. Set aside to cool completely.

oil dough:
200g top flour
70g butter (make sure the dough is wet and smooth, add a bit more butter to get the right texture, this also depends on the flour that you use)

Step:
1. In a bowl, mix ingredients for water dough (except butter), slowly add in water. Knead into a rough dough, add butter and knead to a smooth dough. Cover and set aside for 30 mins.
2. Mix ingredients for oil dough. Use butter knife to cut the butter and use fingertips to lightly rub the butter with flour until mixture look like fine breadcrumbs. Lightly press together the oil dough. Cover and keep in fridge for 30 mins.
3. Divide water and oil dough into 12 portions respectively.
4. Flatten the water dough, wrap the oil dough in it. Flatten with rolling pin, roll up. Cover and let it rest for 15 mins. Flatten from the long side, roll up. Cover and let it rest for 10 mins.
5. Use finger to pull up two end of the dough and press into middle. Flatten the dough into circle and stuff filling, egg wash and sprinkle with sesame seeds.
6. Bake at 210 C for 30 mins.

Note: you may refer to here on how to roll the dough. 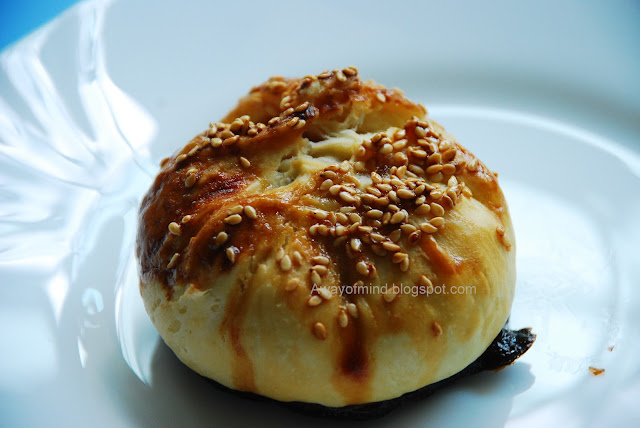 This is the second batch (one of the 18 pcs), see the puff up at the seal? such a puff up is important for a pastry to ensure it gets the flaky layers. However, this puff up usually will cause leakage of gravy from the filling. 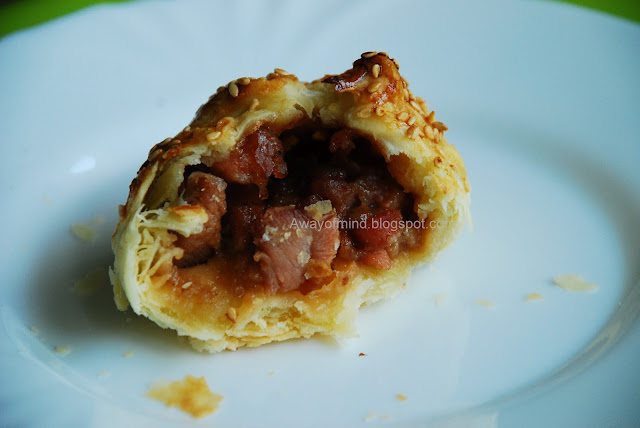 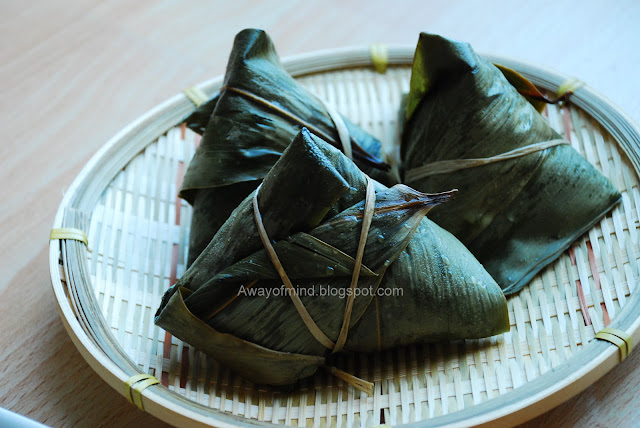 Bak Chang or Zongzi is the rice dumplings made of glutinous rice stuffed with the different filling and wrapped in bamboo leaves. Making Bak Chang was traditionally a family event when my late-grandmother was around, yearly she were wrapped the Bak Chang together with my mother. And when the rice dumpling was done, my late-grandmother distributed most of them to our close relatives. However, at that time we children were consider far too young to learn the wrapping techniques or skills. When come the season (Dragon Boat Festival) for eating the Bak Chang which falls on fifth day of the fifth month of the lunar calender, we were not allow to get close to the kitchen where my late-grandmother and my mother would be busy doing all the preparation and wrapping. So, I didn't get the passed down techniques for wrapping a neat Zongzi :) Luckily, most of them still look tetrahedral :)
Read more »
by Awayofmind Bakery House 22 comments:
Email ThisBlogThis!Share to TwitterShare to FacebookShare to Pinterest
Labels: Zongzi 粽子 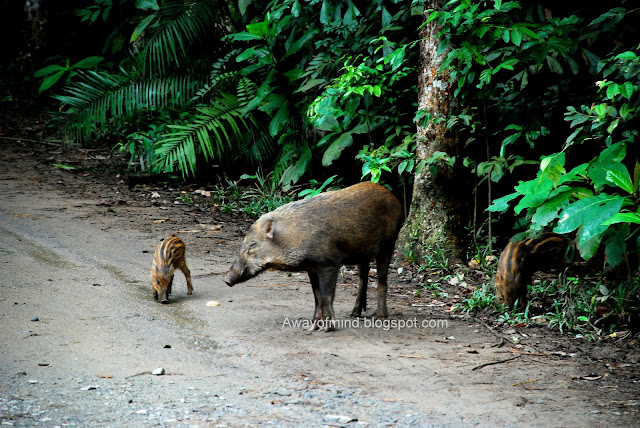 Last weekend we went to Pulau Ubin with friends.

Pulau Ubin is a small island situated in North East of Singapore near to the west of Pulau Tekong. It is an undeveloped land of Singapore. When I was still working in NUS, I heard about the staff from Raffle Museum discovered rare species of marine creatures at Chek Jawa, in my mind Pulau Ubin is fill with large piece of wetland or mangroves. Actually it is not totally right. Pulau Ubin is a village, with no single bank can be found at their town area. In the town area, there are many bicycle renting shops and a few eating places.

We took boat from Changi Point ferry terminal, the type of small fishing bum boat that can carried 12 person from Singapore mainland to Pulau Ubin jetty. After reaching Pulau Ubin, the transportation is mainly by walking, pedaling on a bicycle or by using so call "taxi" (a small van), through mostly the rustic rocky road. If you are looking for a high class resort or hotel, Pulau Ubin is not the place to go. 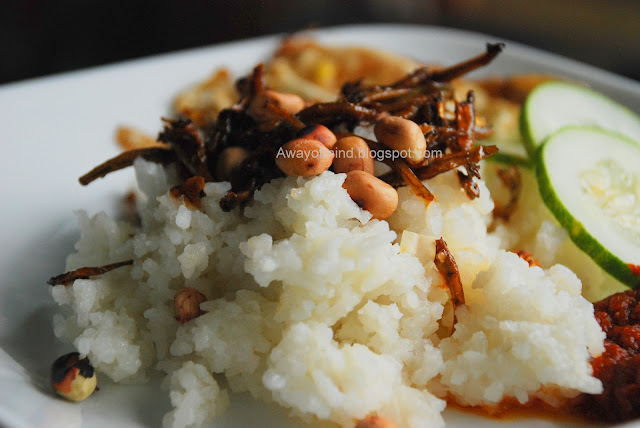 There are days when I'm not keen in cooking and looking for a simple food, Nasi Lemak can be a breeze if you have store bought Nasi Lemak Sambal Chili in the fridge. I place the rice, coconut milk and salt into the rice cooker as Gabriel and WT loves soft rice.
Just fry some raw peanuts in hot wok without oil for a few mins. Take out the peanuts, add oil and fried the anchovies, drain the oil and add 1 tbsp sugar to the anchovies, stir fry a bit to mix well, that's it! Oh yes, sliced some cucumbers on the plate will add vegetables to this dish. It is always refereshing to have the crunchy cucumber to go with this dish. Don't like frying the egg? then go for hard boiled egg! 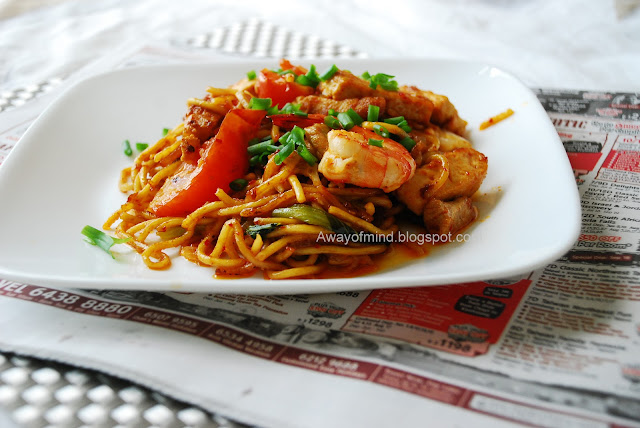 My laptop was down and the laptop service centre took a good three weeks to repair it!! Can you imaging how I "damaged" my laptop!! It didn't give me a sign of warning until one day the laptop just couldn't switch on... they (service centre) told me they reformated my laptop and  two major laptop spare parts have been changed, luckily all my data was captured in the external hardisk :)

Well, I am suppose to be very busy right now but I didn't. The TOP for my house seems delay and I am still lazy to start packing up my stuff but ... already start clearing my kitchen. Lot of cooking and baking were done during last three weeks and I will try to post them whenever I have time.

Ok, come back to my Mee Goreng. This is another delicious Malaysian Indian Style Fried Noodles, the cookbook stated the preparation time is 20 mins, but the real time frame is more than that, if you would like to attempt this recipe try to prepare the chilli paste and the fry tofu a day ahead.

I will be away for short trip, bye! See you next week!