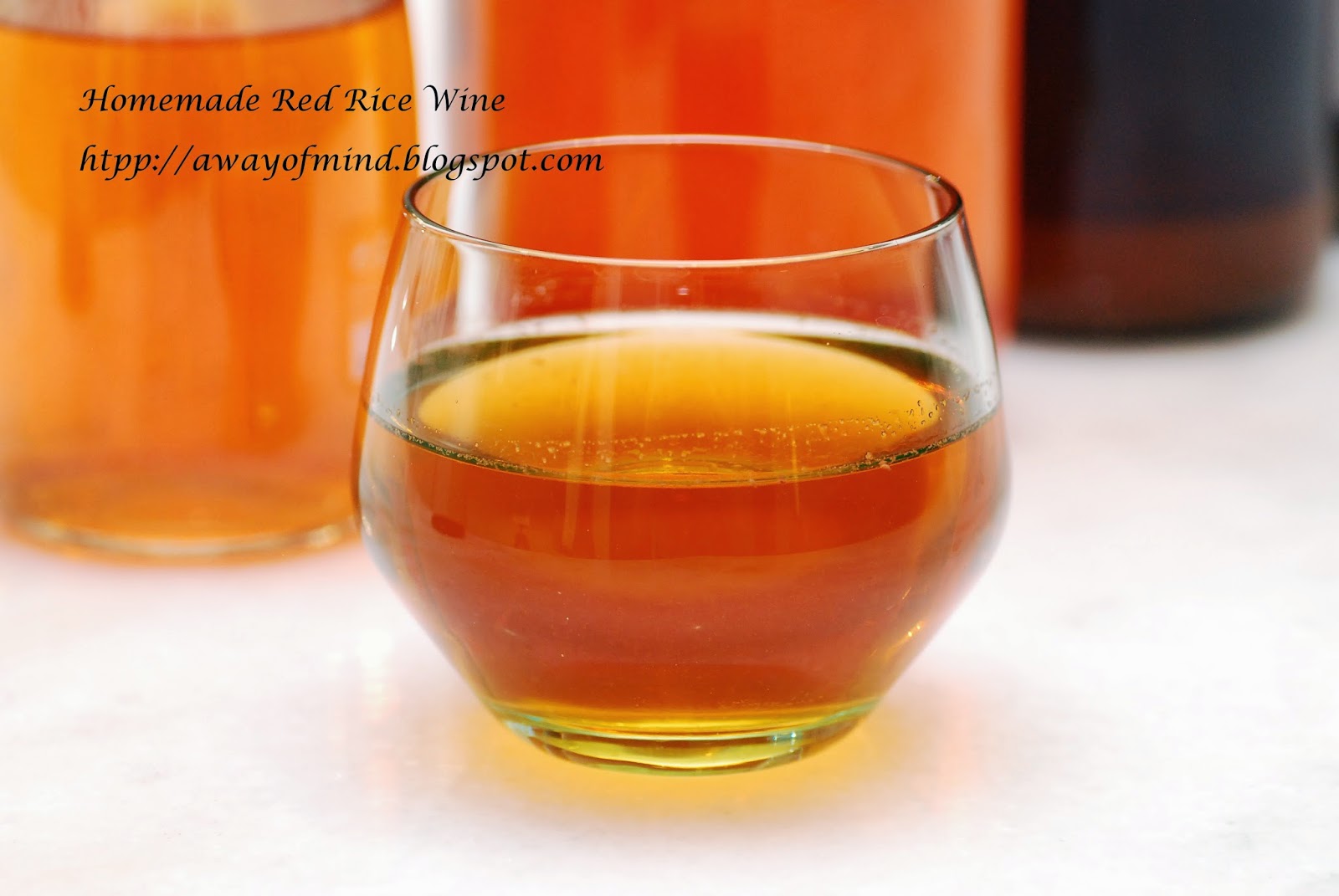 Hi, I'm back from my summer holidays ... still very lazy to move and get back to blogging after two weeks of resting, everything still unfamiliar, Grrr... I missed my friends and the green! I even have to think what is my ID and password when I need to login to blogger, must be the heat here is too bad for me :)

Ok, today get myself a cup of 3-in-1 chai-latte and here go the engines. I would like to share and record my first homemade red rice wine which I brewed it before I went for my summer break (consulted my mum via Facetime so many time just to make sure the process is correct, anyway I still change some of it as I don't have muslin fabric which used in steaming the rice) So the fermentation took me about 60 days because I'm away for holidays and my mum told me even if I took out the rice wine around 30 days, the rice residue in the rice wine will continue its fermentation until the rice dissolved.

In between the fermentation, you will see lots of gas bubble released or trapped between the rice. The bottle of fully pack glutinous rice will gradually loosen out and turned into liquid form. The rice will eventually settled at the bottom. The rice residue left behind can be used for cooking as well.

Note:
1. To get translucent clear rice wine, it is important not to shake or stir the bottle at the final stage. (Haha...top quality and no rice crumble in it)
2. Do not over tighten the lid or cover of the bottle, this is to allow the gas release from the bottle.
3. Place the bottle out of sunlight and in good ventilation room. (I placed it at a corner of my kitchen far away from stove)
4. Every equipment used for the brewing must be free from oil.
This recipe yield around 4 big bottles of red rice wine and about 500g of red rice residue. 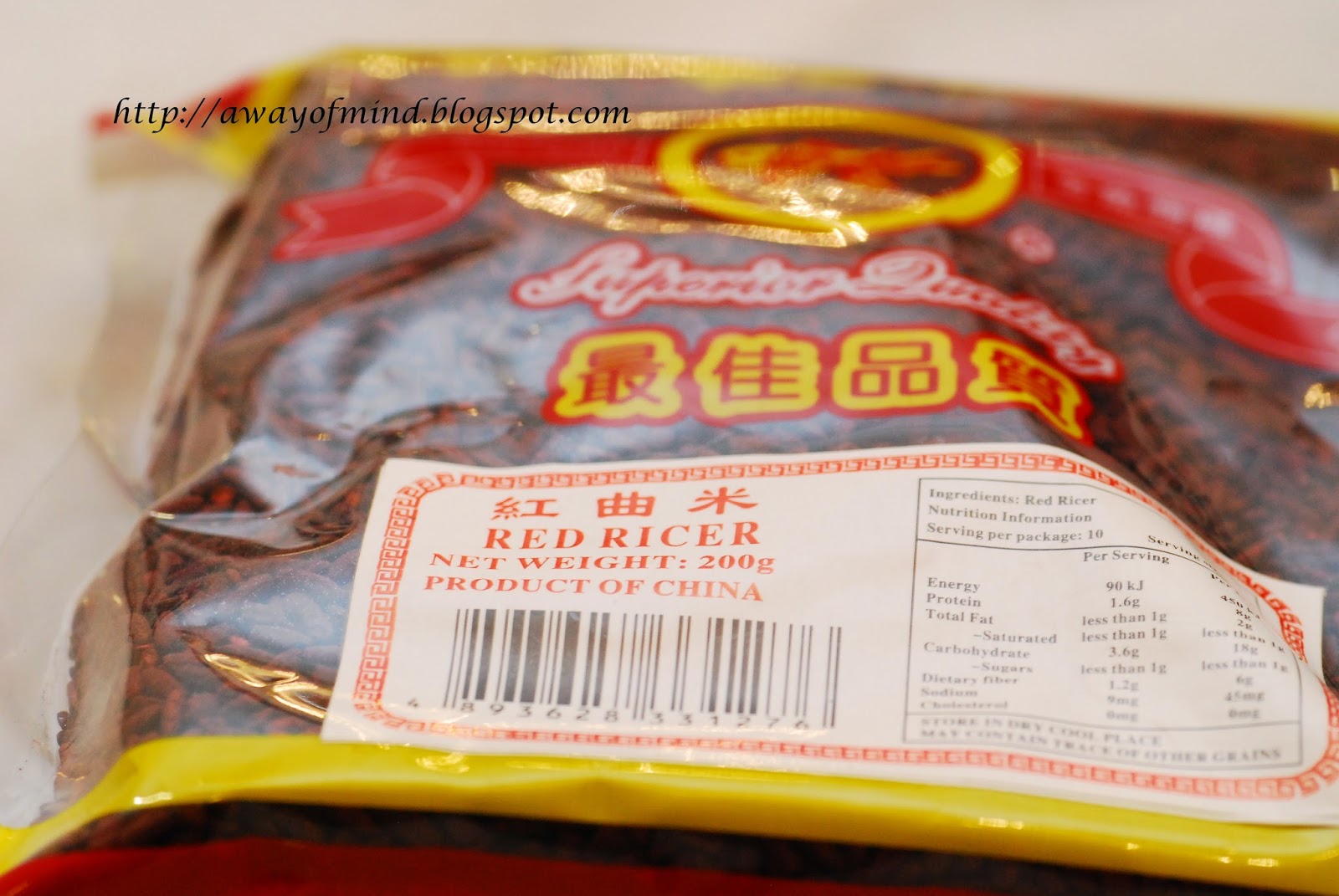 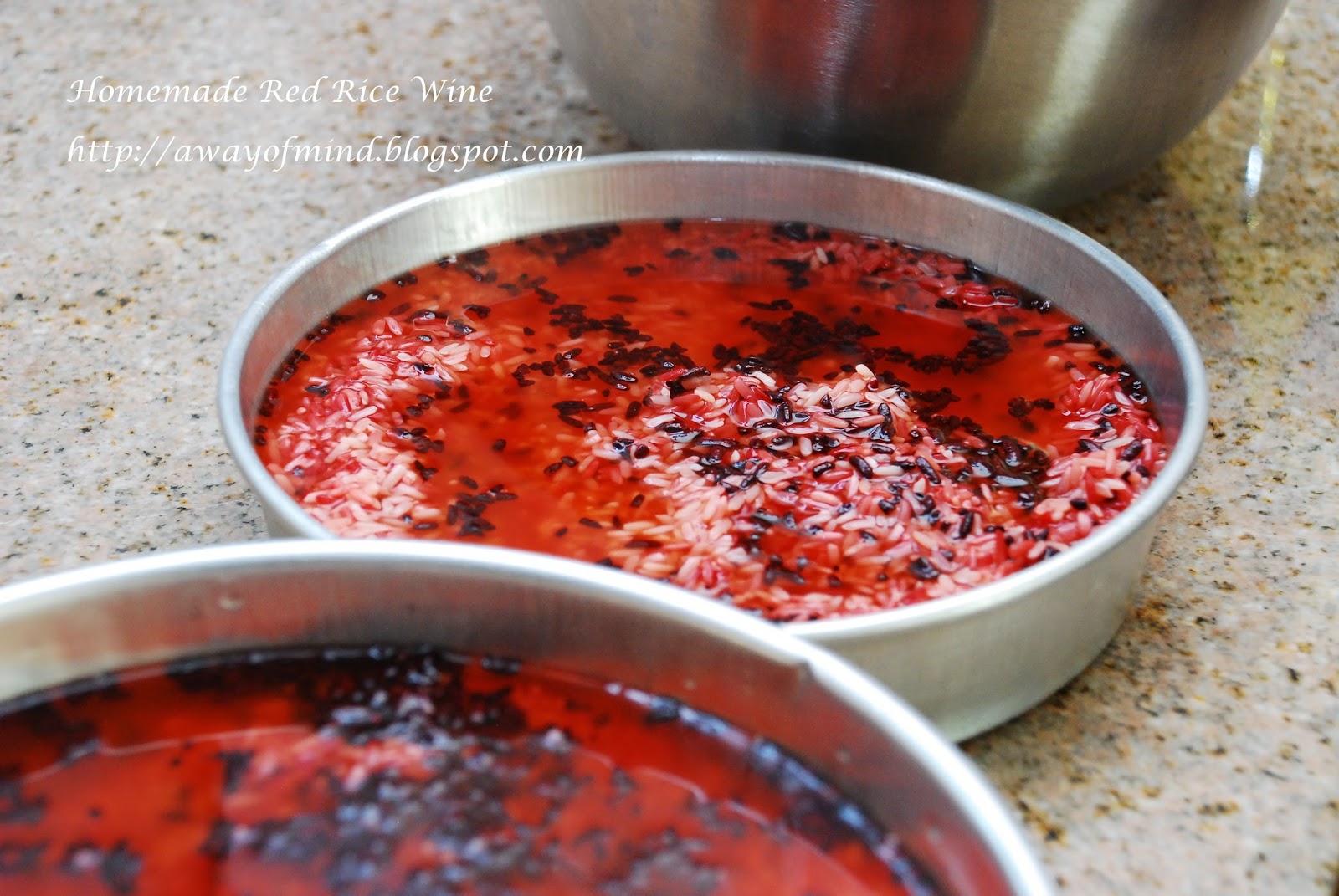 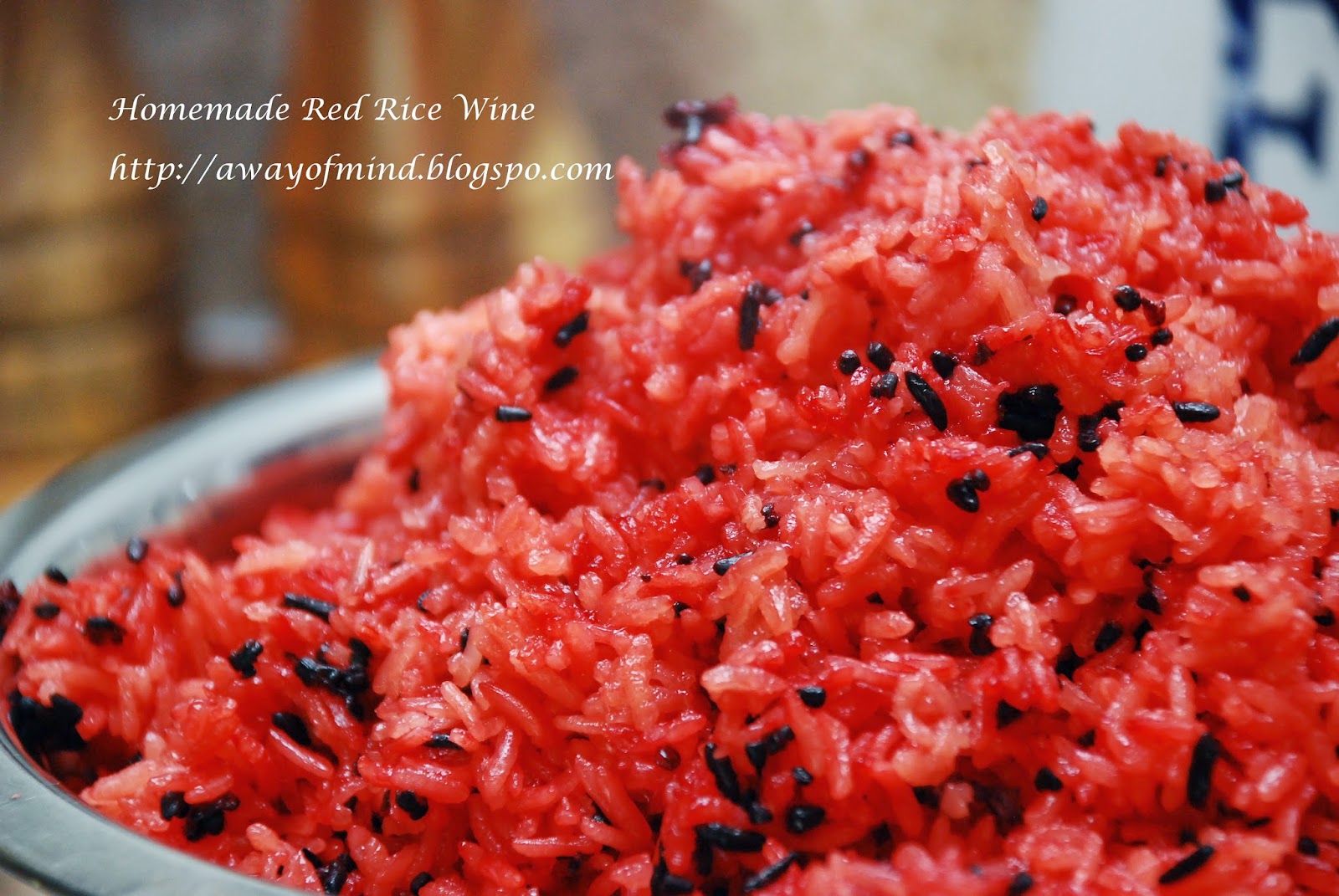 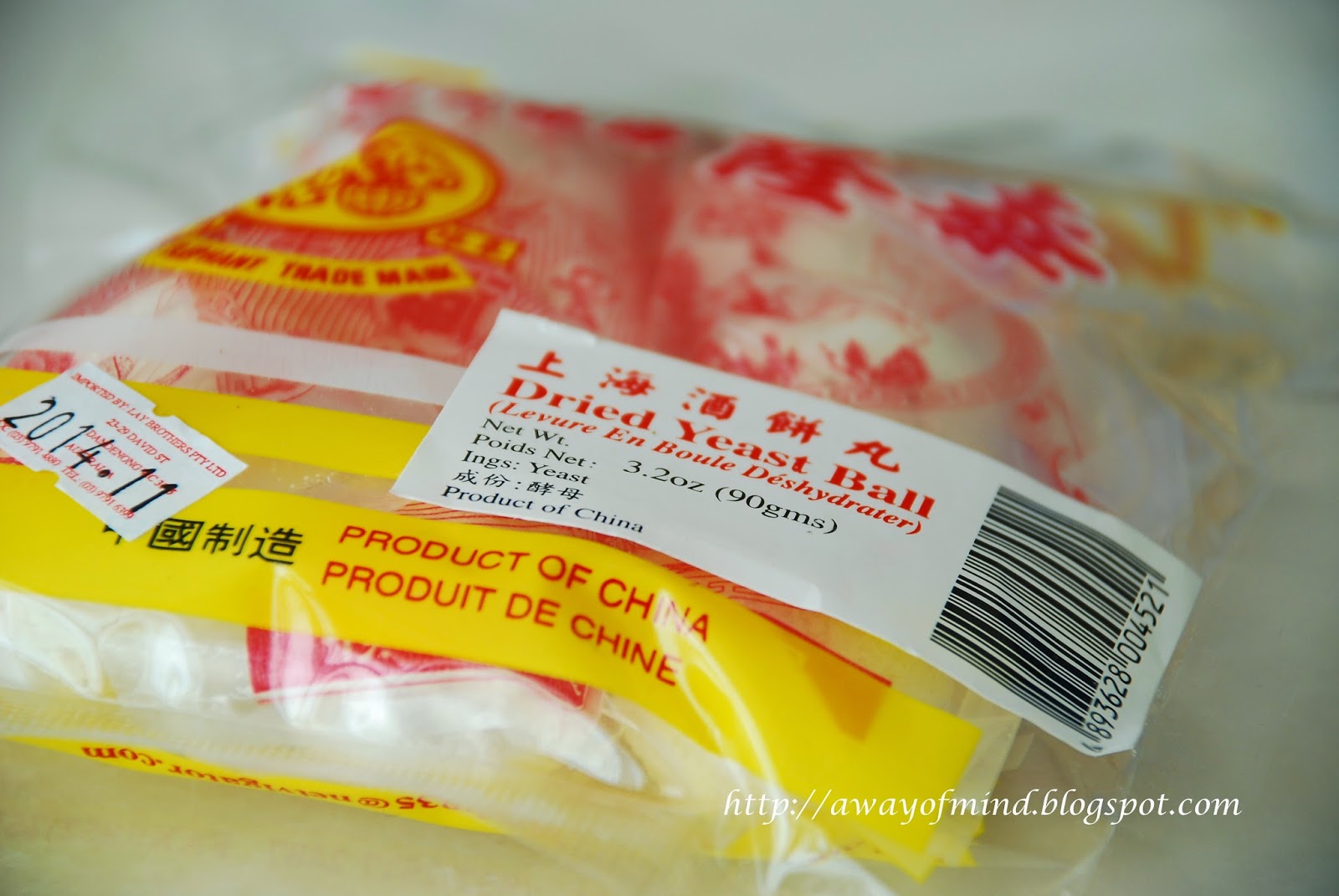 3. Eight dried yeast balls 甜酒饼 was used. You can pound it into powder or crash it by hands. 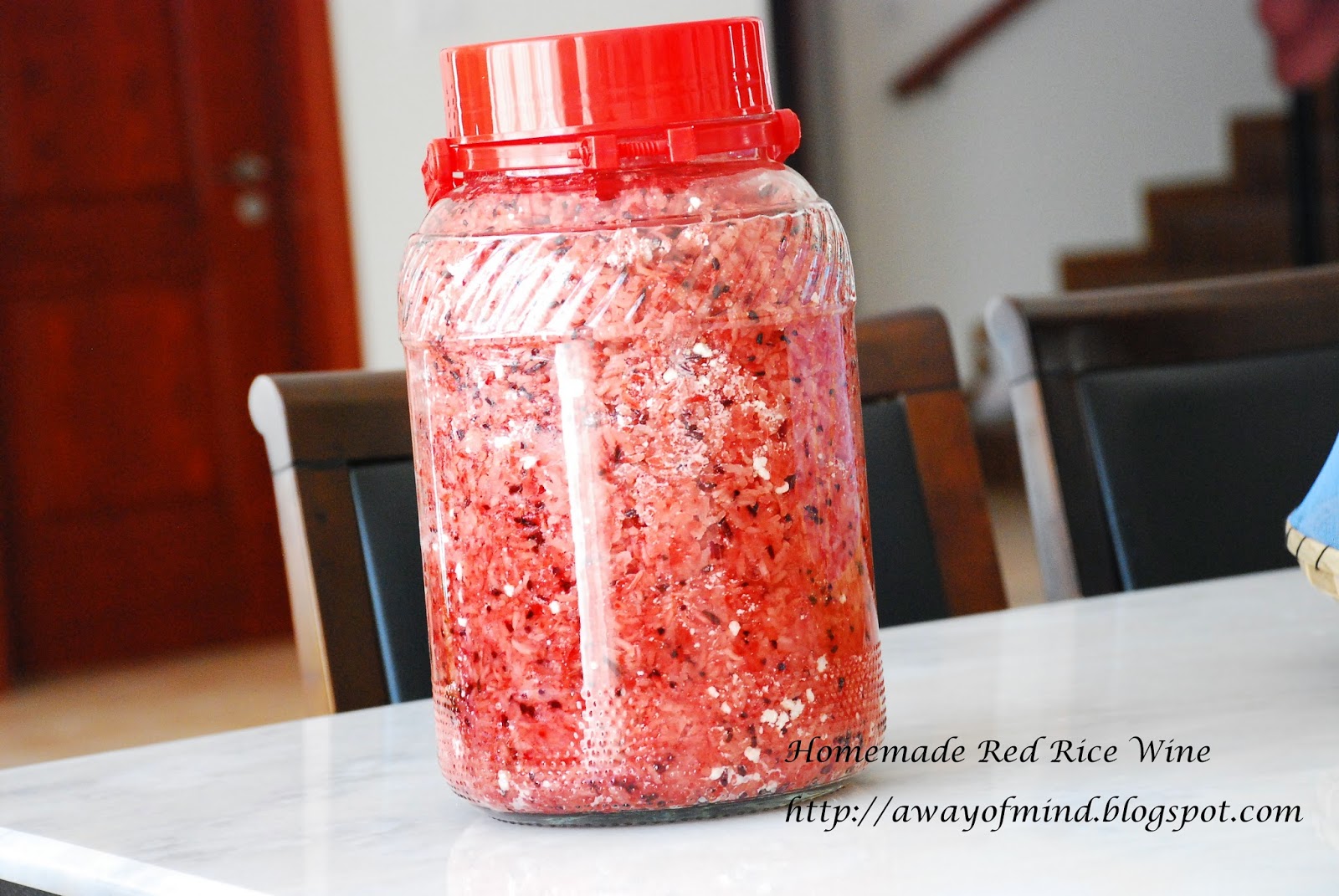 Total sake used is around 600ml. 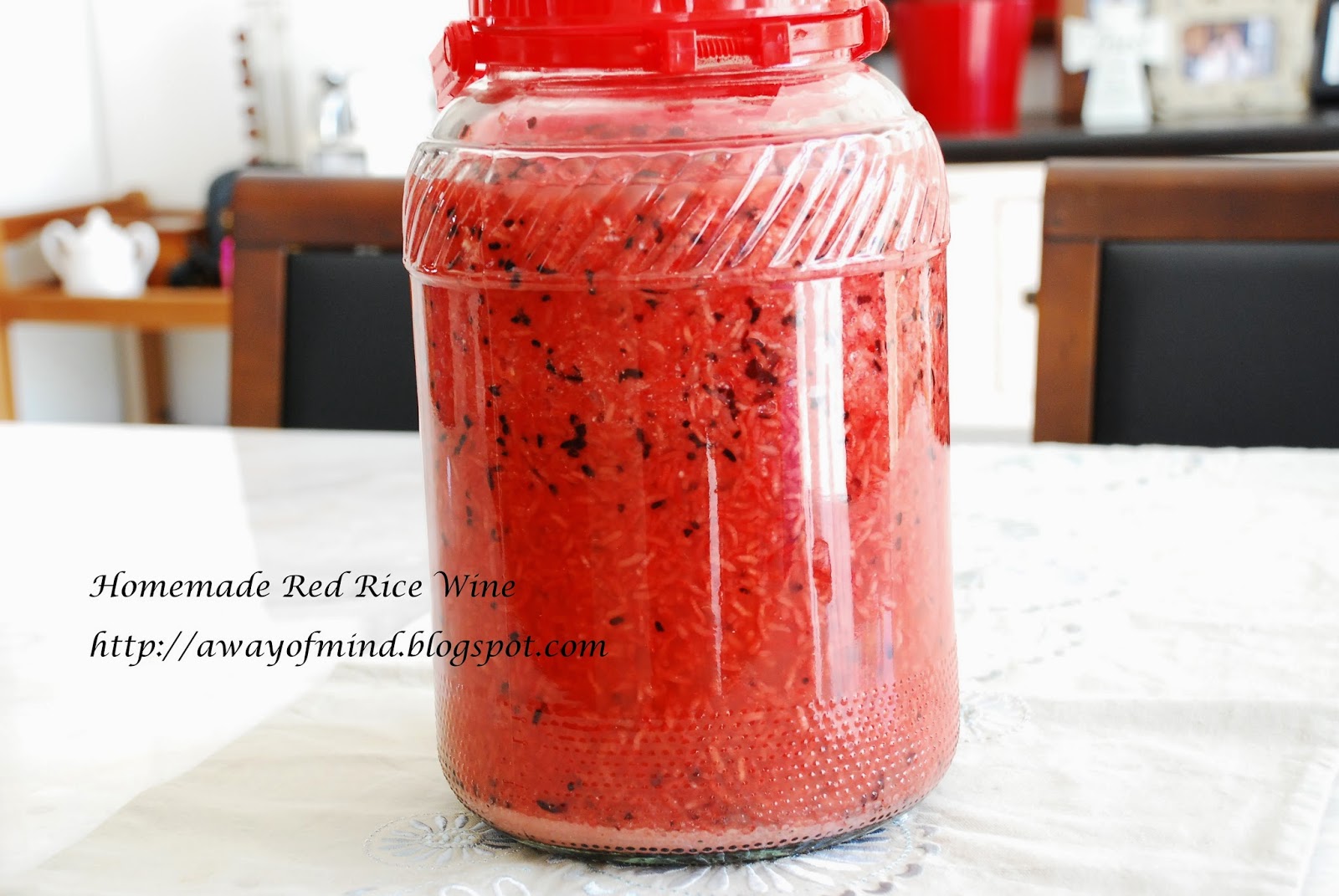 5. On the third days, the changes in the glass bottle is obvious. The glutinous rice is loosen out, lot of liquid form. 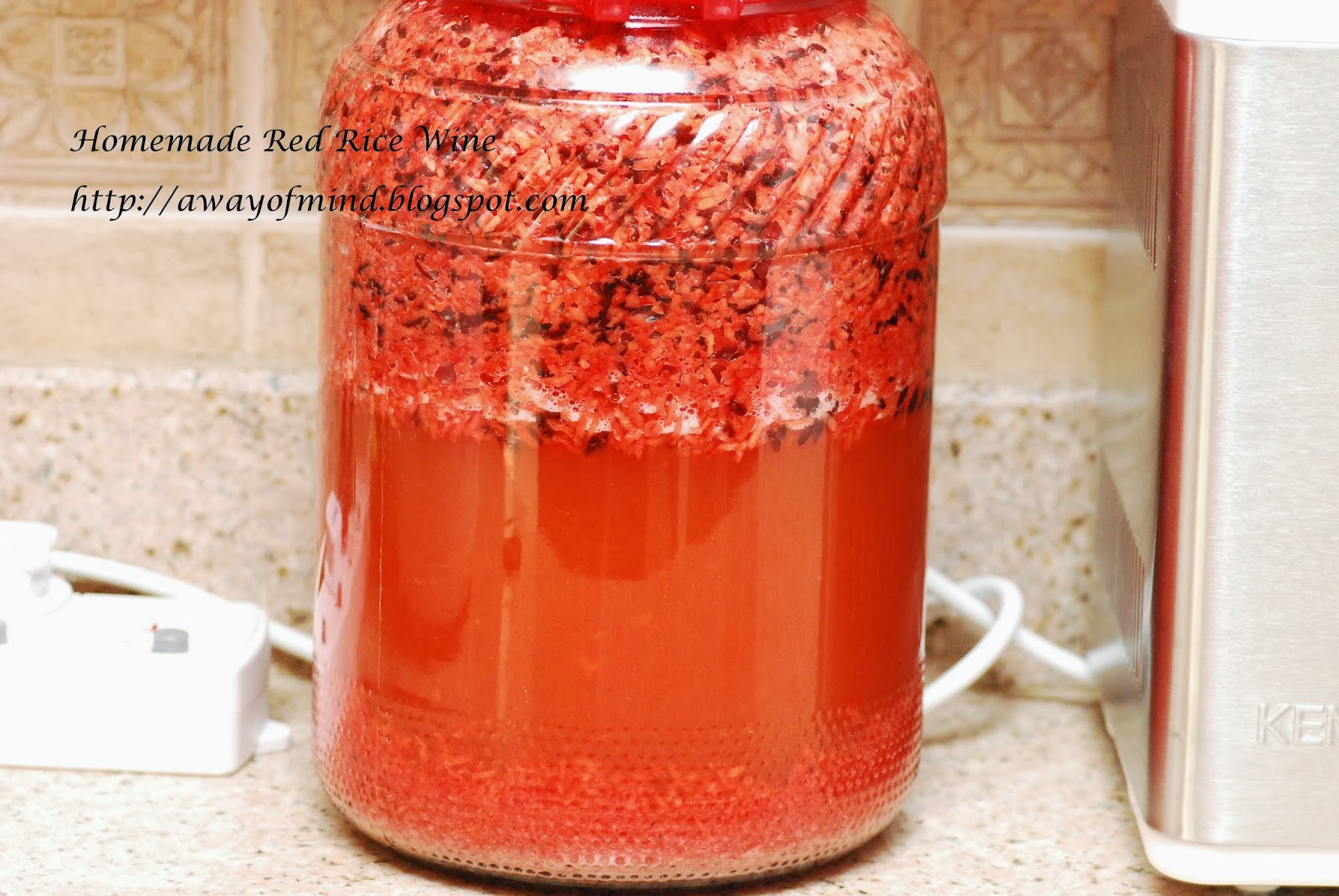 6. This photo was taken on the third week. There is lot of gas bubble trapped or released from the fermentation. Lot of glutinous rice still floating, there is rice crumble settled at the bottom. The liquid is yet translucent. At this stage, some of the time I shake the bottle to help releasing the trapped bubbles. (When I told my mum, she scolded me and insisted I should not shake the bottle) 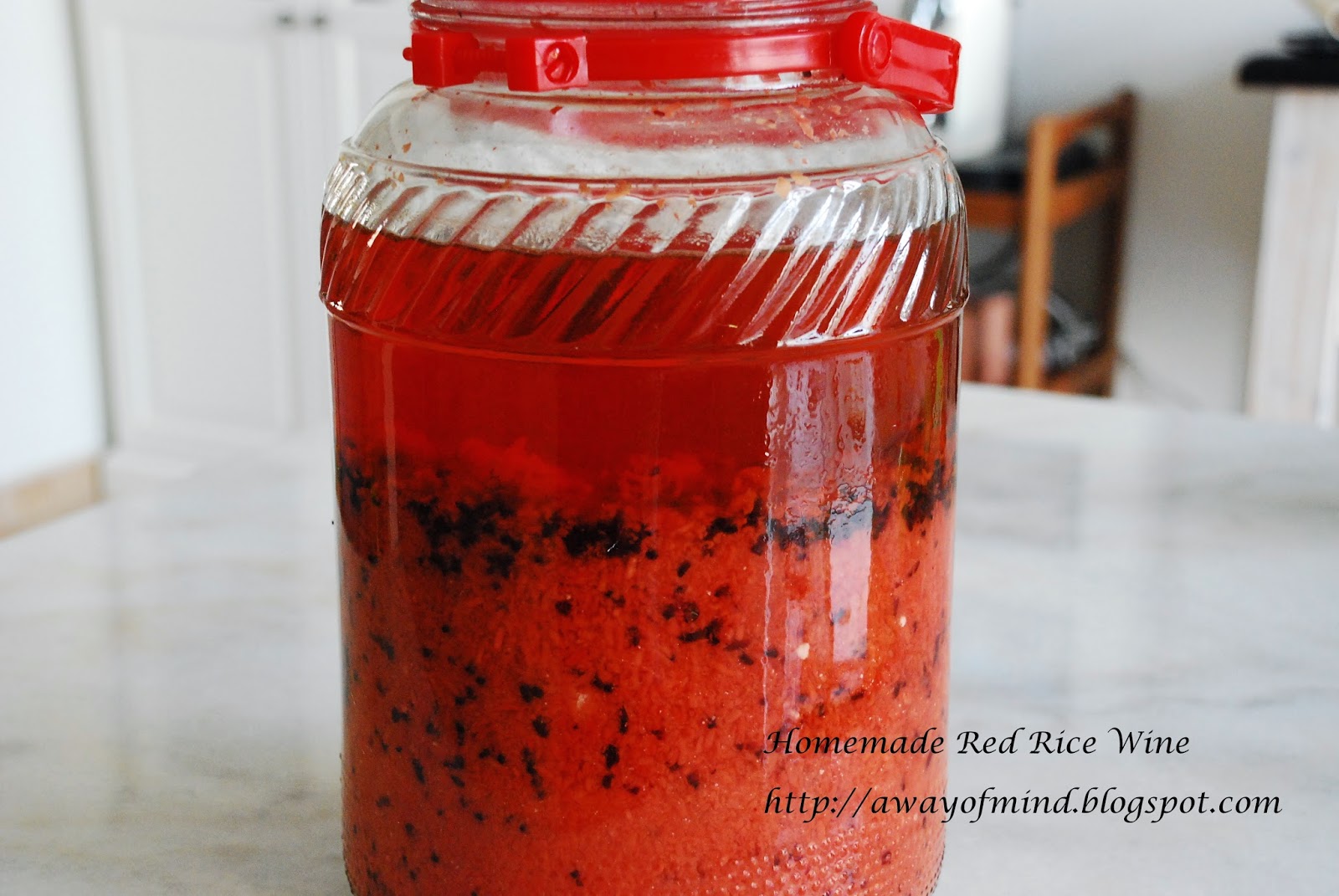 7. After 60 days of brewing, finally all rice settled at the bottom and no more gas bubbles found. The liquid is translucent clear. Do not shake the bottle at this stage. 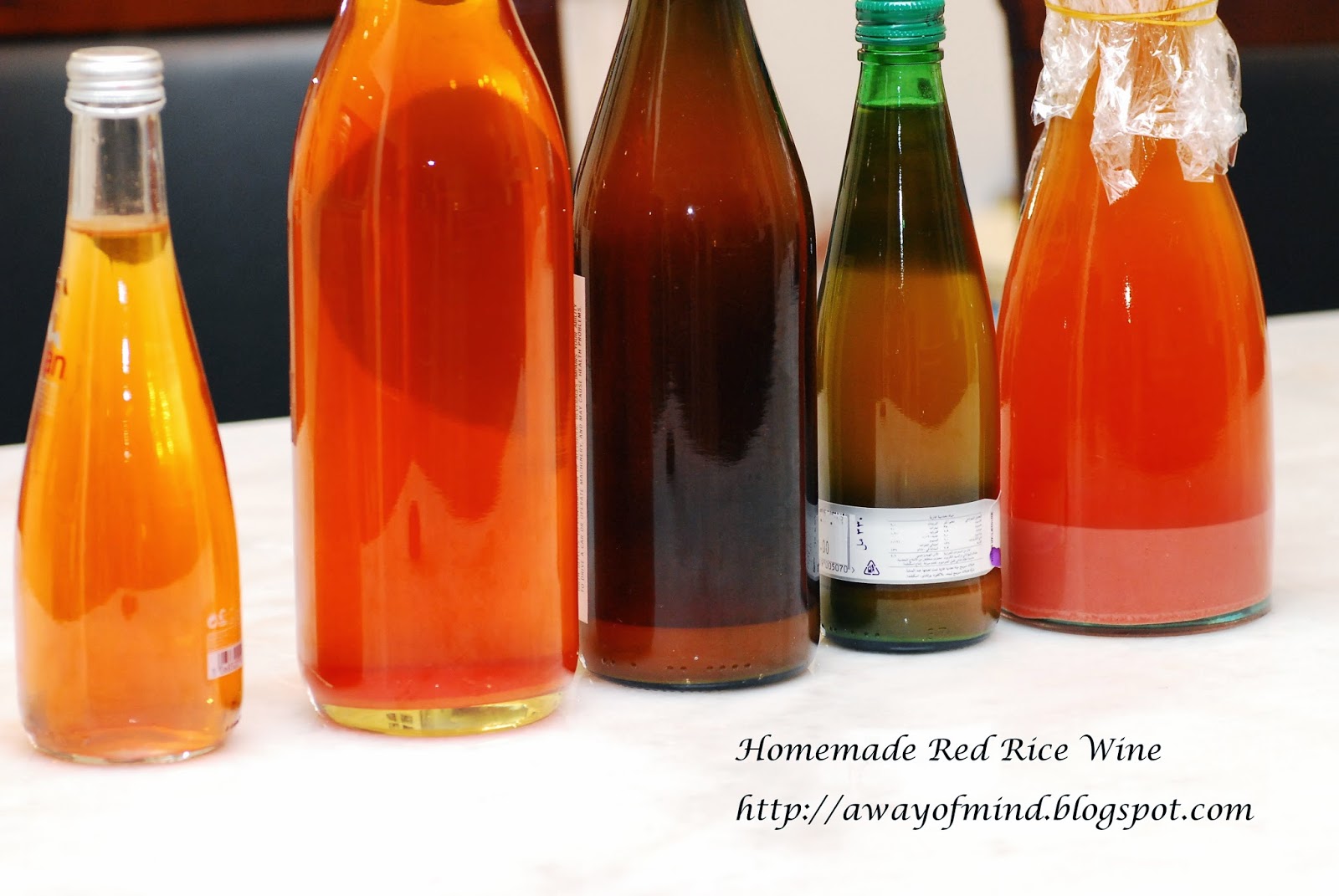 8. From the left Evian small bottle, and the big second bottle are the first red rice wine scoop out from the big glass bottle without filter. The liquid is translucent clear and without rice residue. The liquid in third to fifth bottles has to go through the filter to eliminate the excessive rice residue, initially the liquid was pinkish but after a few days the rice residue settled at the bottom.

by Awayofmind Bakery House
Email ThisBlogThis!Share to TwitterShare to FacebookShare to Pinterest
Labels: How to make